What is PLA and PLA Products

When we think about bioplastic, what comes to mind is about a plastic which can be degraded easily without polluting our environment. Unlike conventional plastic which needs hundreds of years to be fully degraded, bioplastic only needs a few months to be degraded into organic materials.

Polylactic acid, also known as PLA Products, is a kind of bioplastic which produced by processing many kinds of sugar rich materials, such as corns, cane sugar, soybeans, cassavas, and beets. It can also be produced from agriculture industrial waste, such as molasses and bagasse. PLA bioplastic has the highest potential in bioplastic market because of its low price and availability.

Production of PLA bioplastic generally consists of two parts, namely, biological and chemical. The biological part is done by converting the starch or glucose contained in raw materials (corns, cane sugars, cassavas, etc) by using fermentation into lactic acid. And the fermentation is done by lactic acid bacteria. The produced lactic acid is then further processed chemically by adding or altering some of its chemical compound to induce a new characteristic, such as heat stable or higher and faster degradation rate.

PLA bioplastic is transparent, similar to conventional plastics produced by petroleum material. This material is impermeable by water molecule and the tensile strength is close to that of conventional bioplastic. It can also be processed and molded using standard equipments generally used for conventional plastic production. However, the downside of this material is that it is not heat tolerant, which causing it unable to be used for containing high temperature food or drinks.

Commercialized PLA bioplastics comes in many forms. Cups, bottles, foil, moulds, and other kinds of packaging are some samples of commercial bioplastic. PLA bioplastic is also used in medical field as threads for internal suture. Since the thread will degrade by itself, there is no need to remove it after surgery. Besides, the non-toxic characteristic also accounts for its usage in medical field.

Recently, the popularity of PLA bioplastic is increasing along with the increasing concern towards our environment. This material can be one of the solutions for many environmental problems we currently face. Moisture Retention Trays for the Food Service and Retail Mea...

Examples of Moisture Retention Trays These unique and highly effective trays are used for a variety... 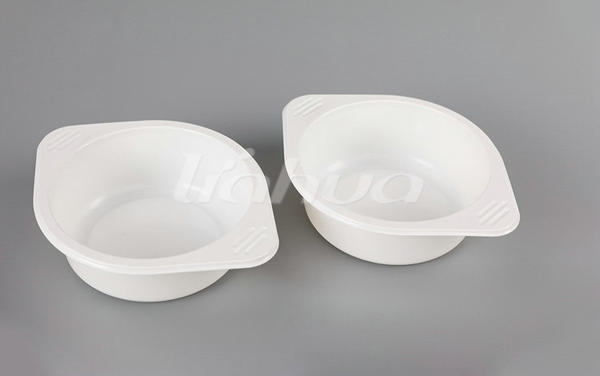 The CPET Meal Tray is a multi-compartment plastic sleeve